When we sit down to eat a delicious plate of sushi, we often imagine we’re eating something quintessentially Japanese. But, like all dishes, it has evolved from its early origins as a way to preserve fish in fermented rice into something a 19th century Edo (modern-day Tokyo) street hawker would in some cases barely recognise. Its ingredients have also multiplied. The salmon roses we love so much today require Norwegian salmon, which wasn’t available in Japan until the late 20th century. What about that avocado and cream cheese California roll? Fun fact: delicious as they are, neither avocado nor cream cheese were around in sushi’s formative years.

Today, we’re not looking at how we do it, we’re looking at how the Japanese do it. So, if you’ve ever been curious about traditional sushi etiquette, read on, enjoy, and then treat yourself to a more authentic sushi experience at the Cape Town Fish Market. 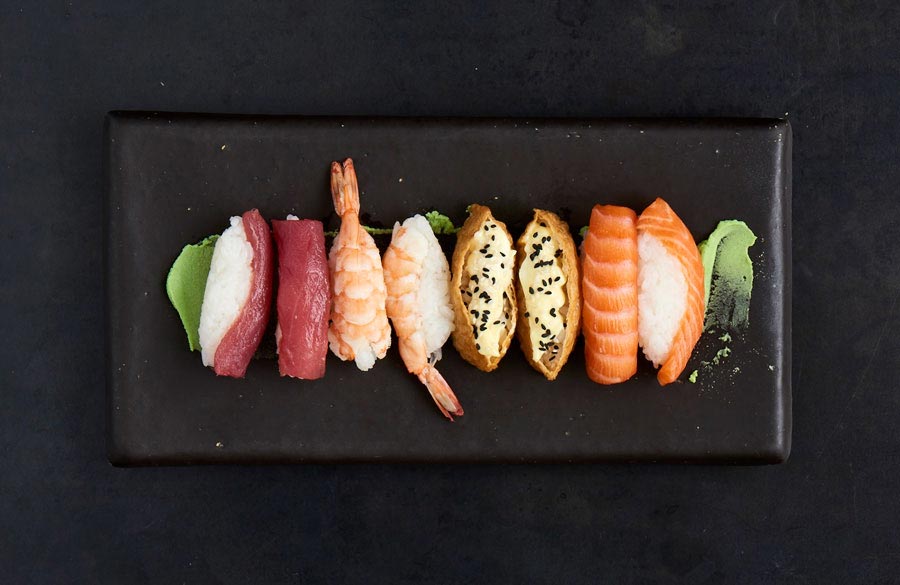 Soy sauce is a savoury condiment made from a fermented paste of boiled soybeans, roasted grains, salt and water, with a little help from a friendly fungus (Aspergillus oryzae). Using traditional brewing methods, it can take several months to make because of the lengthy fermentation process. In sushi’s early development, before we were able to refrigerate fish, it was used as a way to cure portions of fish before they were served as sushi to customers. Today, we use soy sauce as a traditional way to add flavour to our sushi.

While in Western countries we usually just pick up our sushi and dip in soy sauce, this is not the traditional Japanese way. The soy sauce is traditionally meant to flavour the fish, not the rice. Rice soaked in soy sauce is considered improper because then the flavour of the soy sauce overpowers the flavour of the fish. Nigiri is a good example of this. Because it’s served with the rice underneath the fish, it seems logical to pick it up as is, and dip it in the soy sauce. However, the traditional method would be to pick it up and turn it so that only the fish is dipped in the soy sauce.

But how do you make sure the sushi and the fish stay together while you’re turning it? Well…if you want to be very traditional, just use your hands. It’s perfectly acceptable, and that’s how sushi was eaten in its early days. When using your fingers, it’s much easier for you to help the sushi keep its shape. Then, as a final touch to show you know how to really taste the sushi, place it on your tongue fish-first so you get as much flavour as possible.

Wasabi, also called Japanese horseradish, is a plant native to Japan that grows naturally along stream beds in Japan’s more mountainous regions. Its stem is ground up and used as the condiment we know today because of its pungent taste, similar to that of a hot mustard.

In traditional sushi etiquette, you do not take wasabi and mix it with your soy sauce. That is frowned upon, as the two have very different functions. Traditionally, you would take the smallest piece of wasabi necessary and place just that tiny bit on the fish itself. In addition to its hotness, the wasabi stimulates both your nose and your tongue to allow for an enhanced experience of the flavour of the fish.

Ginger is harvested as the root of the ginger plant, which is native to southern Asia. Sushi ginger, often called Gari, is made from thin slices of young ginger that have been marinated in sugar and vinegar, to preserve it and give it a slightly sweet taste. This pickling process can give the ginger either a yellow or pink colour, depending on the age of the ginger. It’s normally the young ginger that turns pink during the picking process. Yellow just means the root was more mature, but it can still be just as tasty.

When it comes to traditional sushi etiquette, ginger is not eaten with the sushi itself. Instead, it’s eaten on its own as a palate cleanser in between pieces or courses of sushi. Its purpose is to clear your tastebuds so you can enjoy the full flavour of the next piece or type of fish you’re about to eat.

While this is the traditional way to enjoy these three essential components of the sushi experience, that doesn’t make it the right way. As every chef will tell you, the most important thing is to enjoy your meal. And our advice? We say embrace diversity. Sometimes it’s fun to try new things, and sometimes the best thing to do is stick to what you love. When you’re enjoying a plate of our delicious sushi, you can’t go wrong.

So, what will you try next time you come and visit us at CTFM?