In order to really understand the development and spread of sushi, you need to remember one thing: modern refrigeration wasn’t invented until the 1930s. Before that, people had to find inventive ways of preserving or cooling their food to make it last longer. And that’s how sushi began – as a way of preserving fish.

Sushi has come a long way since fish was first wrapped in fermenting rice somewhere in Southeast Asia. If you’re ready, let’s dive into the wonderful and fascinating history of one of the Cape Town Fish Market’s best-loved menu options.

Way back in the misty past, sushi was invented somewhere in Southeast Asia. Wait, you mean it wasn’t invented in Japan? Well…yes and no. The modern sushi we eat today is very much Japanese, but it was developed in Japan from earlier forms that came from China in the 7th or 8th century.

As a modern sushi eater, you probably wouldn’t recognise the ancient Chinese variety of sushi as being sushi, and you definitely wouldn’t like the smell. Trust us. Modern sushi is sufficiently different that it’s safe to say it was invented in Japan.

When you actually ate it, you would peel off and discard the rice and then just eat the fish. So the rice in this case was just packaging, much like early forms of pies in Europe, where the pastry was just used to protect the meat inside and was also discarded when the pie was eaten.

Isn’t the history of food fascinating?

Fast forward a few hundred years to medieval Japan, and something new gets added to the mix – rice vinegar. The Japanese found that adding rice vinegar to the recipe greatly reduced the time it took the fish to ferment, and allowed the rice to be eaten along with the fish. However, this also did not smell amazing, but according to some sources, still tasted good. At least to a medieval Japanese person.

The smell was a bit of an issue and helped drive the development of the process until fermentation was abandoned and only vinegar was used to marinate the sushi. This still took some time, so while sushi could be eaten faster, it was by no means the fast food we know and love today.

In the Early Modern period, around 1750, the sheet form of nori seaweed was invented, giving rise to the first forms of rolled sushi, which included various ingredients in addition to the rice. 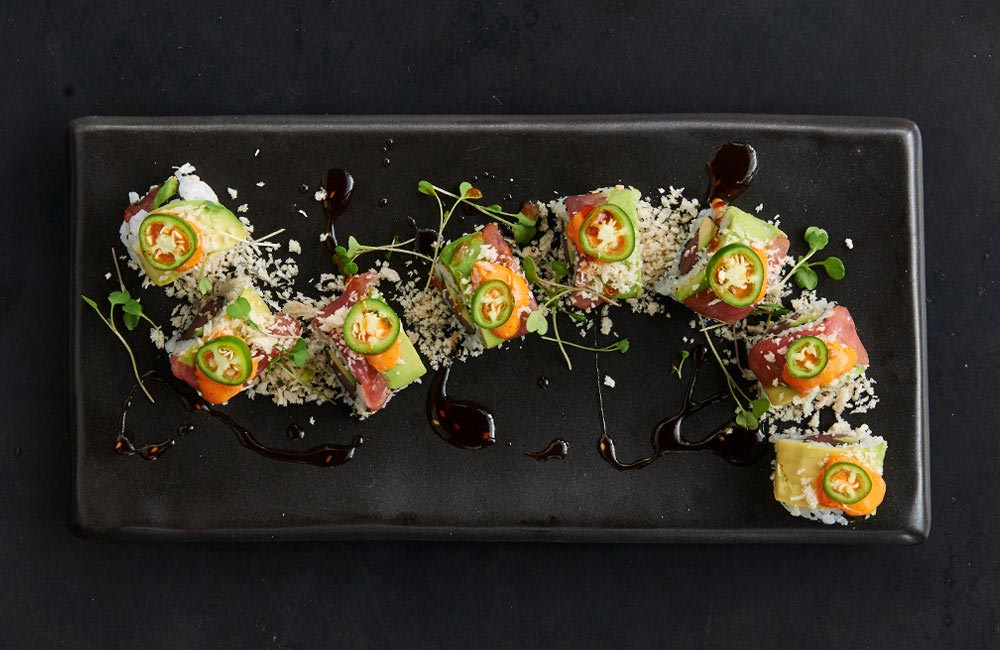 This brings us up to the 19th century, where we find Tokyo native, Hanaya Yoshi (or Yohei), the man generally credited with inventing Tokyo-style sushi and nigiri.

At this time, sushi in Tokyo was being made from fresh fish caught in the nearby Tokyo Bay. But this was still the time before fridges, and spoilage was still an issue, so Hanaya Yoshi either slightly cooked, salted or marinated the fish in vinegar or…drumroll…soy sauce. Today we dip our sushi in soy sauce to add flavour. Back in the day, soy sauce (itself actually made from a fermented bean paste) was used to help preserve fresh fish.

Nigiri is also a term a regular sushi-eater might recognise. The term means ‘hand-formed’ and it refers to a bed of rice, with a piece of fish laid on top of it. This is still a major style of sushi today, but it doesn’t mean you’d immediately recognise what old Hanaya Yoshi was cooking up back in the 19th century. In addition to the things he did to preserve the fish, his portions were huge by modern standards, so not exactly bite-size, as with most modern sushi.

This was also the period in which sushi stopped becoming slow food and started becoming fast food, with little sushi stalls springing up all over Tokyo.

In the 20th century, the Japanese government cracked down on small sushi stalls because of unsanitary conditions, giving rise to the first generation of proper sushi restaurants.

As you might remember, by the middle of the 20th century, large-scale refrigeration was possible thanks to the invention of modern refrigeration technology in the 1930s – and this is where sushi starts going international. Thanks to commercial refrigeration, sushi fish could now be transported all the way from Japan to the West Coast of the United States.

While sushi was eaten in certain elite circles in the US and Europe before World War II, it wasn’t until the 1960s that America got its first sushi restaurants, beginning in Los Angeles and New York.

From there, sushi has exploded onto the world stage as a delicious, healthy meal, and is now eaten across the globe. This, of course, has resulted in lots of experimentation and adaptation as local chefs have taken the sushi concept and invented new forms to cater to local tastes.

One of the best examples of this is the California Roll, which, as its name suggests, was invented in California and replaced the fish component with avocado or cucumber to help introduce sushi to a Western audience.

Since then, sushi has been eaten and served in many different ways. For example, the first known sushi conveyor belt only started rolling in 1993 in Australia – which, of course, brings us to Cape Town Fish Market’s own place in the 1,800 year history of sushi: In 1997, CTFM was the first restaurant chain to introduce the sushi conveyor belt to South Africa. And we’ve been serving up delicious sushi made from fresh fish, in both traditional Japanese and Western styles, ever since. Today, Cape Town Fish Market is on the cutting edge of sushi fusion with our Signature Sushi range. Designed to bring together global cuisine in new sushi-style creations, it includes mouth-watering prawn and mango rolls, soy-cured salmon, tuna tartare and our smash-hit fish tacos. The the history of sushi may be in Japan, but its future is truly international.

To see how far sushi has come, take a look at our delectable sushi menu here.