‘Sushi’ technically refers to the rice, not the fish, in sushi dishes. The fish itself is sashimi. But don’t worry, you’re not using it incorrectly – today, ‘sushi’ has come to mean the whole package, not just the rice. The word ‘sushi’ itself comes from the Japanese for ‘sour tasting’, a reference to early forms of sushi, when the rice was fermented to help preserve the fish it contained. Curious? You can read all about it in our post on The History of Sushi.

But that was just the appetizer. Now, on to the main course – CTFM’s handy guide to sushi terminology. Whether you’ve never tried sushi before, or you’ve been enjoying it for years, our guide to sushi names and terms will have you ordering sushi like a pro in no time – and enjoying it even more.

A California roll is a roll (‘maki’ in Japanese) with the rice on the outside, and the traditional dried seaweed wrapper (‘nori’) on the inside. Created in California in the 1960s to appeal to western tastes, the California roll replaced fatty tuna with avocado, and traditionally contains avo and crab or prawn as a filling. Today, however, California rolls with salmon and avo are also very popular.

California rolls are a great way to introduce people to sushi. The ingredients are familiar, and because the nori is on the inside, people don’t feel like they’re eating seaweed, so you can’t go wrong.

Shrimp. Short and simple. Ebi is another great place to start for beginner sushi eaters and will usually be cooked, unless you’re ordering ‘ama ebi’ or ‘sweet shrimp’, which is not. Look for Ebi Bites on our menu if you’re curious. 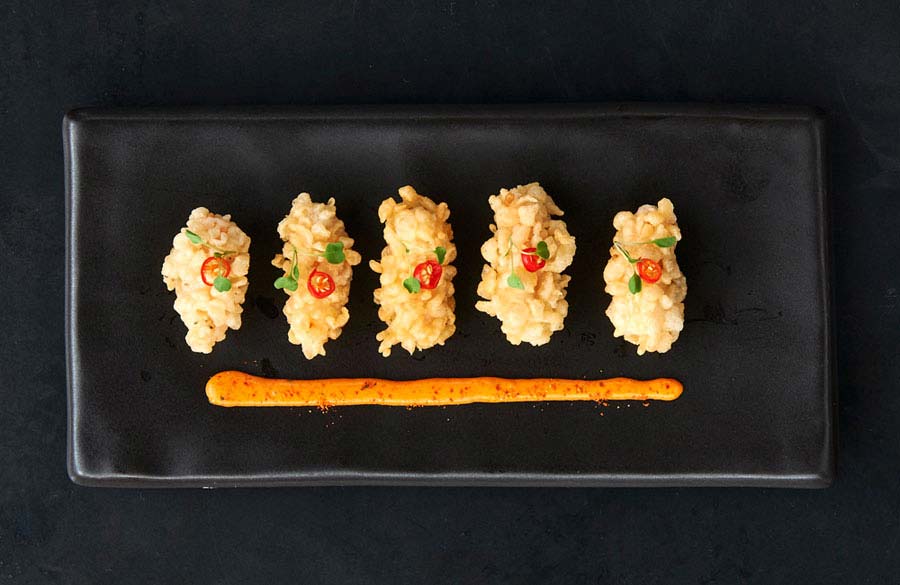 Similar to California rolls, fashion sandwiches (‘uramaki’) also have rice on the outside and the dried seaweed wrapped (‘nori’) on the inside. The filling, commonly consisting of avo and salmon or prawn/ crab, is contained by nori on either side, which is then covered by a layer of rice, usually coated in sesame seeds. Fashion sandwiches are made in rectangles instead of rolls, but are also sliced into smaller portions as with maki.

Fashion sandwiches usually make use of more rice per portion, so are great for the hungry sushi lover.

Gari refers to pickled ginger. In traditional sushi, ginger – pickled to make it last longer – is used not as a topping, but as a palate cleanser between different varieties of sushi. Its slightly spicy heat helps to neutralise the taste of sushi so that you can experience the full flavour of the next bite. Gari can be either pale yellow or pinkish, the colour varying depending on the pickling process used.

Hand rolls (‘temaki’) are made up of traditional sushi ingredients – including avo, salmon, tuna and prawn or crab – contained in a cone of nori (the traditional dried seaweed wrapper). They are called hand rolls because they are made ‘by hand’ as opposed to with a makisu, the small bamboo mat used to roll maki rolls.

If you’re interested in how maki or hand rolls are created, step up to the sushi bar at your local Cape Town Fish Market and ask one of our sushi chefs to show you how it’s done. When you see all the skill that goes into making it, it’ll taste even better.

Chopsticks. Here’s a fun fact, though: while today we think of sushi as always having been eaten with chopsticks, it was originally a finger food. Yes, it was meant to be eaten with your hands. Today, many sushi-lovers in Asia still use their hands for maki rolls and hand rolls, and only use chopsticks for sashimi. You can try it yourself at a CTFM – we don’t mind…

When you do use chopsticks it’s considered polite to place them together, parallel to yourself, on the shoyu dish (the dish containing your soy sauce) when you’re not using them. That’s also where they should come to rest when you’ve finished your meal. 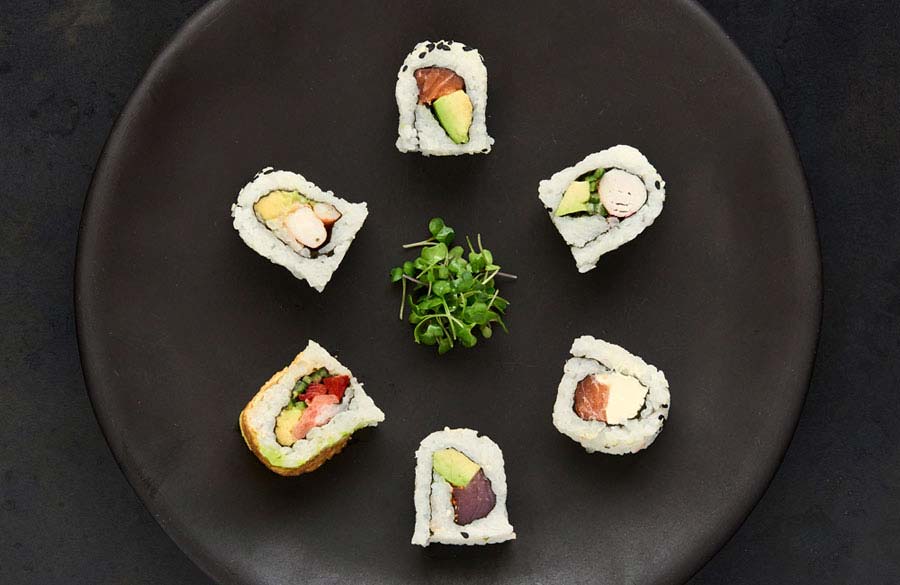 At Cape Town Fish Market, we make our inside-out rolls with many delicious combinations, including spicy tuna and avo, salmon and Philadelphia cream cheese, and even a vegetarian version with avo and ginger. They’re a firm favourite among our customers.

An itamae is a skilled sushi chef. Traditional Japanese sushi chefs train for seven years to become an itamae. At CTFM, our itamae are both friendly and helpful. If you’re curious about sushi, ask them a question. It’s great when customers are interested in the sushi experience.

‘Maki’ in Japanese means ‘to wrap or roll’ and refers to the rice and seaweed rolls we usually think of when we think of sushi. However, maki refers to the traditional form of these rolls, with nori (the seaweed wrapping) on the outside, and rice on the inside.

Like other rolls, maki is prepared with a makisu (the small bamboo mat used for rolling sushi) to roll the core ingredients inside rice, and then inside the seaweed wrapping to form a long roll, which is then cut into slices. This forms the bite-size portions of sushi we are familiar with. The core fillings of maki, California rolls and inside-out rolls are broadly similar – and delicious.

Makimono are made like traditional maki (see above), but contain only one ingredient, instead of two or more – for example, a tuna makimono roll would contain just tuna, wrapped in rice and nori. They’re a great choice if you like bigger portions of fish in your sushi rolls.

Nigiri consists of a slice of raw fish on top of a small bed of rice. This combination is traditionally seasoned with wasabi. 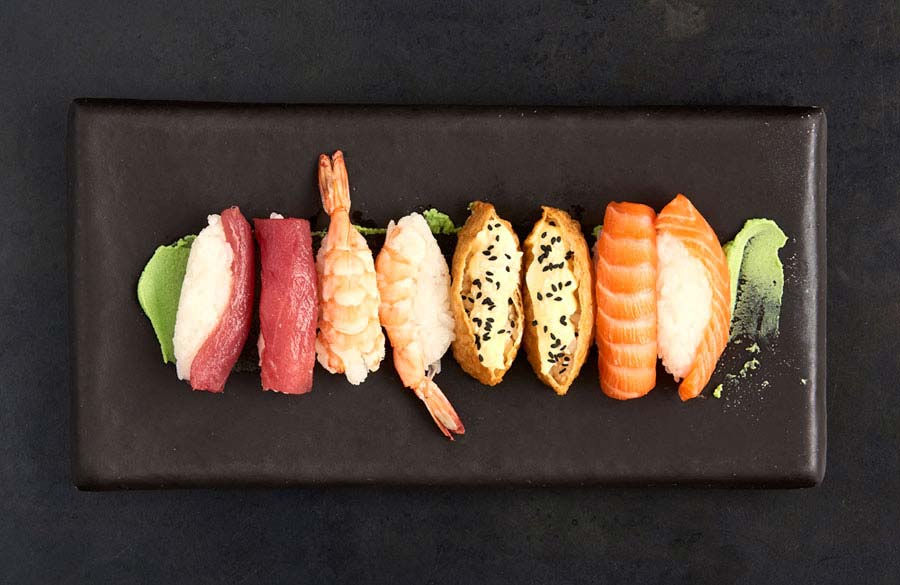 This small fillet of fish on a shaped bed of rice is the most common form of sushi outside Japan and is internationally the image most often associated with sushi. It’s also the next step on the adventurous sushi eater’s way after maki rolls, and CTFM offers salmon, prawn and tuna nigiri, as well as a bean curd vegetarian option.

Okonomi means ‘as I like it’, similar to the French ‘a la carte’. You use it when you want to convey to a (Japanese) chef that you will be selecting your own sushi, or that you would like to order multiple pieces at once. If you know what you like, this is a good way to order sushi.

Omakase, of the other hand means ‘please decide for me’. You use it when you want the sushi chef to select sushi for you. When you’re at a good sushi restaurant, and you’re feeling adventurous, this is a great way to discover the best sushi they have to offer. After all, the chef knows which fish is freshest and which sushi tastes great. But be careful – if you ask for omakase, it’s usually assumed you’re not worried about the price, so you might end up eating some expensive sushi without realising it.

Rainbow rolls (tazuna sushi) are inside-out rolls (see above) with additional strips of fish and other ingredients across the top of the roll, giving it a ‘rainbow’ of colour. These additional strips can be the same as the inside ingredients to add texture, or completely different to add some interesting new flavours.

CTFM’s Signature Sushi range, for example, has a tropical take on the traditional rainbow roll by adding strips of mango to a roll with a prawn and avo centre. We think it’s delicious.

Roses reverse the traditional order of the maki roll by wrapping a thin strip of fish around a small core of rice. The shape of the fish wrapping often arches slightly outwards, resembling rose petals. Roses are usually served topped with mayonnaise and roe. 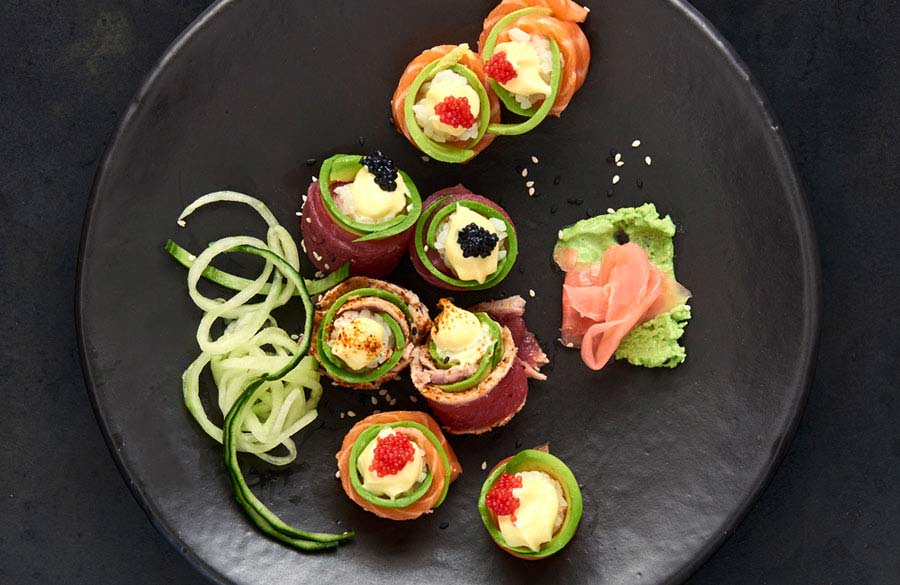 Roses are more difficult and time-consuming to make than maki rolls, because each rose has to be wrapped individually, whereas maki rolls are made in one long roll and then sliced into portions. While salmon roses are the most famous and most popular, we also highly recommend our tuna and seared tuna roses.

If you’re a big fish fan, sashimi is the best way to experience the true texture and flavour of your favourite fish. Tuna and salmon sashimi are year-round favourites, but for a twist on the classic – and if you’re just getting into sashimi – our seared tuna sashimi is a great way to enjoy it.

‘Tempura’ doesn’t refer to a dish, but rather the way of cooking seafood or vegetables by dipping them in batter and deep-frying them.

You’ll find tempura ingredients across our range of sushi to add crunch, flavour and texture to our dishes.

Domo arigato. That’s Japanese for ‘Thank you very much’.

We hope you start noticing new things in our sushi that you never saw before – and enjoy it more than ever.